Book of the Month: The Marrow Thieves 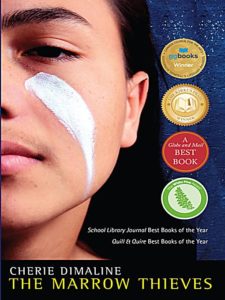 Title: The Marrow Thieves
Author: Cherie Dimaline
In the YP Library? Not yet!

Synopsis: In a futuristic world ravaged by global warming, people have lost the ability to dream, and the dreamlessness has led to widespread madness. The only people still able to dream are North America’s Indigenous people, and it is their marrow that holds the cure for the rest of the world. But getting the marrow, and dreams, means death for the unwilling donors. Driven to flight, a fifteen-year-old and his companions struggle for survival, attempt to reunite with loved ones and take refuge from the “recruiters” who seek them out to bring them to the marrow-stealing “factories.”

Why we love it: “I’d read this book not knowing there would be powerful queer representation in it, so finding it within this multi-award winning book was like a gift. Dystopias are among my favourite kinds of books to read (…is that weird?) and this one uses the historical trauma of colonization and destruction of Indigenous communities to draw a future parallel to a time when they again become commodities to a system, and how resilient both youth and adults have to become to survive. It’s more than a futuristic thought experiment, but a thoughtful look at the unfair treatment of Indigenous populations in the present. The queer content is woven as naturally into the narrative as everything else is, and I think people looking for this as part of an overall story (rather than the focus being on just sexuality, or a coming-of-age, coming out story) will treasure it. I want this book to be twice as long, I didn’t want to leave the story.” –  Sheena, YP Staff