Book of the Month for May: One Man Guy 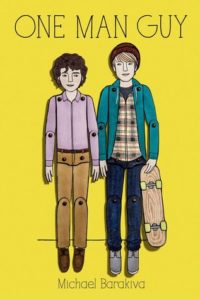 Synopsis: Alek Khederian should have guessed something was wrong when his parents took him to a restaurant. Everyone knows that Armenians never eat out. Why bother, when their home cooking is far superior to anything “these Americans” could come up with? Between bouts of interrogating the waitress and criticizing the menu, Alek’s parents announce that he’ll be attending summer school in order to bring up his grades. Alek is sure this experience will be the perfect hellish end to his hellish freshmen year of high school. He never could’ve predicted that he’d meet someone like Ethan.

Ethan is everything Alek wishes he were: confident, free-spirited, and irreverent. When Ethan gets Alek to cut school and go to a Rufus Wainwright concert in New York City’s Central Park, Alek embarks on his first adventure outside the confines of his suburban New Jersey existence. He can’t believe a guy this cool wants to be his friend. And before long, it seems like Ethan wants to be more than friends. Alek has never thought about having a boyfriend—he’s barely ever had a girlfriend—but maybe it’s time to think again.

Why we like it:
“I found this book a book of acceptance no judgement and a romance. It is a great encouraging book for youth who are coming out it shows that no one really cares if you’re gay etc… they’ll like you for you. I personally liked it because it’s a comfort read and makes your heart flutter at the same time. I highly recommend this book because it’s a happy book and like I said it’s full of acceptance and pride. “IT’S TOTALLY GAY????️‍????????️‍????” -Erick

Tags: book of the month , books , lgbt books , LGBTQ YA